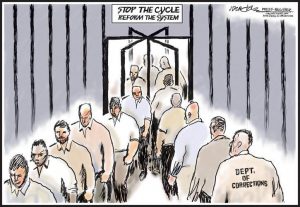 A free will offering will be taken

John Wetzel is widely recognized as one of the most thoughtful leaders in corrections today. A graduate of Bloomsburg University, he was appointed Secretary of Corrections for the Pennsylvania Department of Corrections in January 2011 by Republican Governor Tom Corbett and reappointed by Democratic Governor Tom Wolf in January 2015.  During his tenure as Secretary of Corrections for Pennsylvania, a 24-year average growth of 1500 inmates per year was eliminated – the first prison population reduction in Pennsylvania in over four decades.  He has spearheaded the restructuring of the community corrections and mental health systems, and he has re-engineering internal processes to yield a more efficient system of program delivery within the Department of Corrections.  With over 28 years of experience in corrections, he has been selected as Chair of the Council of State Government’s Justice Center’s Executive Board and Vice President of the Association of State Corrections Administrators (ASCA). He is a member of Harvard’s Executive Session on Community Corrections.  Indiana University of Pennsylvania awarded him an honorary doctor of laws in May 2016.

Ms. Hudson is the Deputy Chief Public Defender for the Montgomery County Office of the Public Defender, the third largest public defender organization in Pennsylvania.  Prior to joining the Montgomery County Office of the Public Defender, she served for ten years as an Assistant Federal Defender for the Federal Community Defender for the Eastern District of Pennsylvania, Capital Habeas Unit, where she represented clients on death row in their post-conviction and federal habeas appeals.  In her last year with the Capital Habeas Unit she also served as the Director of Training, designing, implementing, and managing an ongoing training program for all Capital Habeas Unit staff. Ms. Hudson began her legal career as an Assistant Defender with the Defender Association of Philadelphia, where for four years she represented clients on cases ranging from civil commitments, simple misdemeanors, and multiple-count felonies. Ms. Hudson received her undergraduate and law degrees from Cornell University. In 2013, Cornell Law School presented her with an award for exemplary public service.

Christopher Murphy has been involved in Probation and Parole for over 34 years.  He started as an Adult Probation Officer in Montgomery County in 1983, where he also served as a Supervisor and Deputy Chief.  In April, 2007, he was appointed Chief Adult Probation Officer for Chester County.  Chris has partnered with Warden Ed McFadden, departmental agencies, community groups, the faith based community, and individuals to bring about change and opportunities on issues of Re-entry.  This includes parole planning, workforce development, the fatherhood initiative, the Women’s Re-entry Assessment Program and cognitive behavioral training for inmates.   Chris is the Vice-President of the Pennsylvania County Chief Adult Probation and Parole Officers Association and serves as a member of the PA Reentry Council.  He is a graduate of West Chester University with a B.S. in Criminal Justice.

Find Out Who Your Candidates are at www.vote411.org