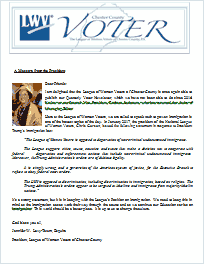 A Message from the President

I am delighted that the League of Women Voters of Chester County is once again able to publish our Quarterly Voter Newsletter, which we have not been able to do since 2016.  Kudos to our Second Vice President, Barbara Lathroum, who has assumed the duties of Managing Editor.

“The League of Women Voters is opposed to deportation of non-criminal undocumented immigrants.

The League supports cities, towns, counties and states that make a decision not to cooperate with federal  deportation and enforcement actions that include non-criminal undocumented immigrants.  Moreover, the Trump  Administration’s orders are of dubious legality.

It is simply wrong, and a perversion of the American system of justice, for the Executive Branch to refuse   to obey federal court orders.

The LWV is opposed to discrimination, including discrimination in immigration, based on religion.  The Trump  Administration’s orders appear to be targeted at Muslims and immigrants from majority-Muslim nations.”

It’s a strong statement, but it is in keeping with the League’s Position on Immigration.  We need to keep this in mind as the Immigration cases work their way through the courts and as we continue our Education series on Immigration.  This world should be a better place.  It is up to us to change the culture.

God bless you all,

Find Out Who Your Candidates are at www.vote411.org